Copyright Kavi Arasu.
October 25, 2006Travel TalesMadurai
Deepawali this time was in ! It is not so very often that one gets to spend quality time with rustic charm. This time around, there were five full days of it. 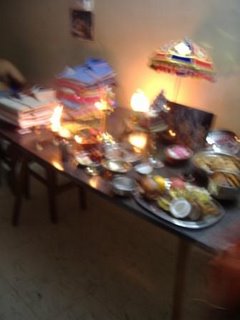 Deepawali itself was a simple yet grand affair. Simple as there were just the immediate family. And grand, because, it was just the immediate family. Soaked into it. As much as all those sweets and savouries must have soaked into various ducts and creaks in the body. If I am to start running to shake them all out, well, maybe I will have to circumnavigate the globe. Twice !

Woke up to some disturbing news that the has developed cracks. After 400 + years, I am not surprised. But it was not a good sight to see the majestic pillars propped up by metal beams. The ostensbile reason: indiscriminate water usage through borewells causing the ground to shift. I felt so very let down. When will people learn.

I clicked a few other snaps this time around. I went to a childrens park that I used to go as a kid. 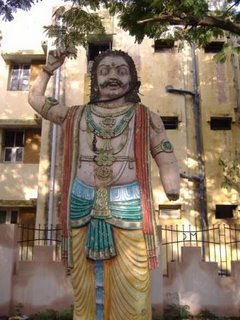 This one used to be a ‘scare statue’ for me, when I was a kid. God knows, why they put this statue up in a Children’s park. Right next to him used to be much smaller statues of Thiruvalluvar and Gautam Buddha. They have long since disappeared. Perhaps a sign of the times.

This guy himself used to be full bodied with a sickle in one hand. To me he appears as threatening as ever. Even without the two hands.

The city itself was bustling with its usual trading activities. Fruits, vegetables, nuts, trinkets, cars, mobile phones, watches, crackers, appliances and what not ! All getting sold and all getting bought !

The fruits and vegetables sold on the platform looked as alluring as ever. One element that I noticed this time around was the ‘tri-cycles’. 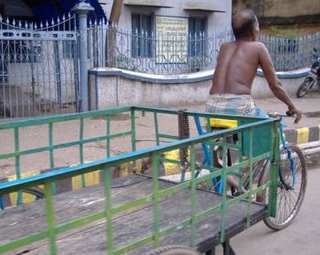 We don’t get to see them as much in . They seemed so inhuman, but I guess they are an important source of livelihood for many.

With my new found interest in Garbage cleaning ( after Gandhigiri) couldn’t help capture the advancements in ‘technology’ was making. 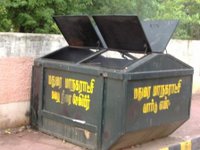 The swing in my balcony looks as alluring as ever.

Perhaps one more round of feeling the breeze and thinking about the days that have gone by..

But as the poem goes,

We came into today morning. The journey and its adventures would require a separate post by itself. For now, the memories of are as pleasant as ever.

Thanks for all the Deepawali wishes. Wishing everyone a great festive season and a year of cheer, happiness, health and fulfillment to follow.

8 thoughts on “Snapshots of Madurai !”