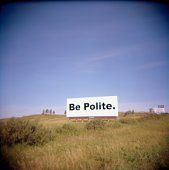 1. People opening doors for others right behind them
2. People helping others pick up a newspaper or a pile of dropped documents
3. Shopkeepers saying thank you to customers in a sales situation

The next you know the newspapers were out with the news that Mumbai is the rudest city in the world. Now, I would call that oversimplification.

If these were the parameters well, I don’t think any city in India would even merit an entry into the competition. The context is just wrong.

The sheer size of the city and the number populating the city creates so much of moving elements that it is both unfair & incongruous to draw parallels. Its like playing a Wimbledon match with a squash racquet. However good your squash racquet, it still is an uneven game.

Given scarce resources, and an ever growing populace laying claim to these resources, there can be no doubt that time is the greatest of levelers. I wouldn’t expect the person in front of me holding open the door for me in Mumbai. Same with the other two parameters. Well, http://healthsavy.com/product/viagra/ would I be happy if they did so. Oh, yes, I would be. They are good ‘nice to haves’. But the ‘nice to have’s cannot become the core.

The core is about true caring. About bonding. And not about the EXPRESSION of the caring. When the rain gods descended in Mumbai last year, people were not opening doors for others behind them. They broke down the walls along with the doors and held forte. While it took Louisiana, with all its fine manners months to recover, Mumbai was back within days.

Nobody opened doors for others. People did it for themselves with great élan.
Nobody helped other pick up newspapers. People are careful enough not to drop it. And if they did, they know that its ok and move on.
No shop keeper said thank you. He just had the shops open in the most trying of circumstances, because it made sense to him to do business. People had more important things to do.

Quite frankly the Readers Digest report will raise a few eye brows, if at all. For the man on the street in Mumbai, he will still open his own doors and remember not to drop the newspaper. Life will go on with full zest and great vibrancy!

One thought on “Mumbai Rude Brood !”