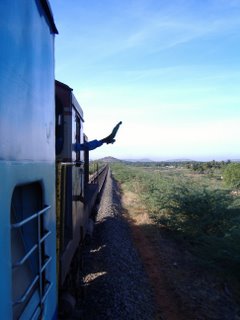 A trip back to ones hometown, always evokes strange emotions. On the one hand, it carries with it so much of energy and passion for the ‘lost years’, that the challenges of the present gets so mystically obscured by the wonder of the past.

We arrived at Madurai on a Saturday morning. The city itself was bereft of the hype and hoopla of the bubbling metropolis that I came from. But it still managed to retain a portion of old world charm amidst modern day malices in the name of development. The traffic was as confused as ever. The heat more piercing than ever. Hoardings and billboards seemed to scream at us. Hawkers and autorickshaw drivers, actually did! It was all part of the grand heritage. As I sat bemused among the cacophony of noise & colour, I realized that I had missed all this!!

We arrived at home much to the happiness and joy of all around. When you know you are irrational, and your family accepts it, because you are a part of them and they are a part of you, there cant be a better bonding gum.

At home, the first thing that I noticed at home was the ‘flame of the forest’ in full bloom. That tree held many a story. It spoke an unspoken word to me. I remember that tree being a sapling and tending to it. Whenever the tree bloomed, there was some element to cheer for in the house. And I used to look forward to its bloom. Although many beliefs got lost in the transition between the innocence of youth and thoughts of adult hood, this one stuck.

The good food, the great inner family dynamics, some of the best breezes and the long walks into memory could only accentuate the importance of the good times gone by. I thought to myself that the city itself had changed quite a bit. Not rapidly. But visibly. My mother told me exactly the same words about me! I shrugged like any other tourist would, when told about the changes in the city!

Soon, it was time to pack up and come back. Everytime I pack up from home, I remember the immortal lines from ‘English August’. “The ecstasy of the arrival never compensates for the emptiness of the departure”. We said our goodbyes. Collected some collectibles, luggage and some thought. We climbed on to the train.

And as the train chugged out, I stood by the door. Taking as many deep breaths as possible. Hoping to carry some of the city’s whiff to buffet my thoughts. The train pulled out with strange sounds. And the same sound that was music to my ears three days back, seemed like a harsh jar of machinery.

As I climbed on to my berth, i recalled, that next day would be a new day. In a different city that I now call home. I close my eyes, hold on to my past. The city of Madurai had an ancient history of resilience. A never say die attitude saw her through many of its crises. One could do anything to her. But one could never ignore her! She just moved on from strength to strength over what seemed like insurmountable challenges.

I took a few deeper breaths. The next day morning would require more of that spirit. In good measure.