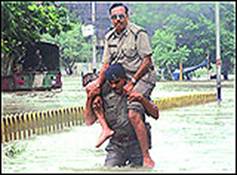 Scene: A flood affected area of Vadodara, Gujrat
Cast: Joint Commissioner of Police , K. Kumaraswamy, riding on the shoulders of a Constable to save his feet and trousers from Flood Water!!!
Source: The Indian Express, July 2
Venky sent this in from the US. I guess, the heart skips a beat, every time such a scene is enacted, wherever you are.


The Indian Civil Services is neither civil nor is it a service said TN Seshan some years ago. It opened a pandoras box back then.

The tag of IAS, IPS, IFS etc, the accompanying red beaconed car, colonial bungalows for residences, and a huge assortment of assistants has been motivating factors for the thousands who slug it out at the UPSC examinations every year. It’s a separate industry in itself, from magazines like Competition Success Review to the Dr. Rao’s study circle.

I am told that the UPSC examination & interview test you overall capabilities. I have seen quite a few competent officers. I remember a Uma Shankar who was Dy.Collector at Madurai. And then there was a Sarandeep Singh, who was commissioner of the corporation. Also, the famous municipal commissioner of Pune. Such officers are few and far between http://www.montauk-monster.com/pharmacy these days. Wonder what they do in the UPSC exams.

The Indian bureaucracy was supposed to be one of the three pillars of the Indian state. It is in a sad state now, with power, corruption, pelf and treating of assigned responsibilities as a fiefdom and nothing else. Spineless subjugate to the political machinery, and partner in crime.

The more important point is the way in which officers like Kumaraswamy misuse their power and position. Constables are not around for carrying their bosses. ( I have personally seen them attend to the sons and daughters of their bosses). In times of distress, we expect the officers to wade through any distress and lead their men.. Not be worried about trousers getting wet.

Why call it the Indian Civil Services ?

One can only hope that among the thousands who aspire for the civil services, at least a few more will stick to serving the nation well. Fearless of anything. (Atleast of flood waters) Singing as Tagore did,
Where the mind is without fear…
Let my country awake

7 thoughts on “The Civil Services”