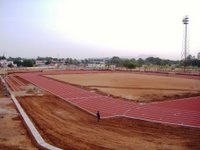 It was here that I first learnt to run on a track. I wasn’t too good at it, as I huffed and puffed before completing a 400 meter jog. It was more of a mental block than a physical one.

It was here that I learnt cycling. On the road at the periphery, I learnt to drive a bike and some years later – a car. It is a must visit place whenever I visit . For the place knows me. Very well. My long walks here and the reflections thereon on the going-ons in my life were pretty vividly scripted on my face.

Elation. Sadness. Apprehension. Fear. Success. Betrayal. Love. Rumour. Skills. Contemplation. Every aspect of my life has been well connected by the road around the Race Course. Till date, one of my favourite activities is to go for walks. I learnt it here.

I remember Vajpayee (when he was an also ran politician in the early ‘80s) coming in here and speaking about the ‘Tamil Freedom Movement’ in . I was there too. Holding on to my dads finger, when it stated pouring cats and dogs. A couple of days later, the stadium had ‘pug marks’ of all the visitors who came to hear their leaders speak.

Some years later ( ‘84-‘85) it was here that Rajiv Gandhi’s choppers landed as he campaigned for the very first time. As handsome as a model. So was the sight of the choppers all parked at the Race Course stadium. I was there to watch them take off and land.

The stadium itself has seen many a name change. KK stadium. JJ stadium. MGR stadium. I don’t know what it is called now. It stopped mattering a long time ago. Every political party worth its salt has abused the stadium. Infact I remember a full fledged dais with air-conditioned a/c rooms constructed in the middle of a cricket playfield, as the then CM Jayalalitha was going to address her party cadres. I was there to see its aftermath.

I also remember the Madura Coats sponsored football matches under flood lights many many years ago. That’s when I saw Dempo Goa and Salgoacar battle it out in . It was a wonderful sight. I am so very happy that I was there to see it.

The stadium has many a bend in the road. Perhaps, just like me. Maybe, we have seen it together.

On a weekend trip a couple of weeks back, I saw a brand new international track that’s coming up. It was quite a sight to see ! And as I saw the brand new track getting laid, I saw the place coming out of a bend in the road ! Still shining. Still offering hope to many who came in the early hours of each morning just to run around.

I suddenly want to see it all complete and full!

3 thoughts on “The Race Course has a new Course”