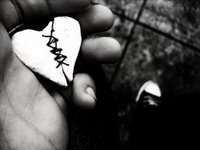 Back home, a cousin of mine has married someone of her choice. Much against the wishes of all around her. You can imagine the high decibels and sound bytes this singular act of “sacrilege” can do! If not anybody else, atleast the phone companies will be laughing their way all the way to the bank. Read on..

Many animated jaws would have opened and stayed open. Others would have just refused to stop.(over the phone, if not in person ) The parents are in pain. I guess the couple are in some sort of pain too. In some way. Brings to focus what this business of marriage in India, is all about. Yes. It’s a business these days. In the garb of culture and social mores!

So, I hear of people threatening to beat up the guy. And the guy threatening to retaliate. The cops have been informed. And they are on the job now too. As though, they had nothing better to do. The plot has obviously thickened. (I am not kidding)

I thought all this happens only in Tamil movies and the Tamil news channels. Like some cyclone affected village being surveyed by a chief minister and umbrella holding ministers. This time, it appeared that the cyclone had crossed the shore, closer home. Uprooting firmly established norms, and leaving a trail !

The girls got married, for godsakes. She is young. Educated. This is a free country. There are thousands of things that people can do to keep them occupied! And not wag tongues and impose thoughts. In the modern age of supercomputers and micro processors, macro importance to misinterpreted values in the garb of culture will continue to hold us down.

Your children are not your children
They are the sons and daughters of Life’s longing for itself.
They come through you but not from you,
And though they are with you, yet they belong not to you.
You may give them your love but not your thoughts.
For they have their own thoughts.
You may house their bodies but not their souls,
For their souls dwell in the house of tomorrow, which you cannot visit,
not even in your dreams.
You may strive to be like them, but seek not to make them like you.

15 thoughts on “A Love Marriage in the family!”