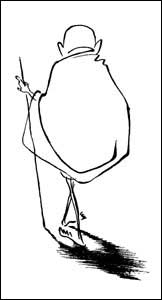 I was witness to Gandhigiri ! Rather party to it, on Gandhi Jayanthi or the birthday of Mahatma Gandhi. For starters, this was an interesting activity ! (Gandhigiri is increasingly getting used as a word that describes living the Gandhian ideologue in modern times with necessary tweaks to suit the times)!

As residents of our locality, we decided to get down to the road and personally pick and clean an empty plot of land being used a garbage dump yard. Posing a health, visual and mental and moral hazard to the entire neighborhood!!

Mahendran called me up late in the night one evening last week, stating that Kamayani and Glory had come up with this idea. From the word go, I was game. I cant understand, where such pockets of energy reside in me, to jump out at these times. The five of us (Kamayani & Avinash, Glory & Mahendran, and me) met at about 10.30 in the night. And discussed. Thus started the Shramdan. (I learnt a new word. Shramdan : Treat all work as equal. Nothing too high. Nothing too low).

The invite got made. It got distributed. We got encouraging responses. We tripped a few times. We fell a few times. But we gathered ourselves back all the time. The day before the event, many other people joined in, as they got to know. New ideas came up. The final strategy was three pronged.

Today, all three were accomplished.

At 10.00 sharp, our hands gloved, with a couple of shovels, lots of gunny bags and a handwritten signboard, stating “Lets keep the place clean” a motely crew started work. Here we were. Seemingly sophisticated men, women and children, putting their nose on the road ( well, almost) to clean up.

Then came the mound of garbage that had accumulated over 4 years. Step by step. Rather, bit by bit. The clean up continued. More http://healthsavy.com/product/levitra/ people joined in. Children jumped in to do their bit. Shopkeepers watched in awe. Some clicked photographs (god knows why). Others just stood there.

Dripping sweat did not deter anybody. The piercing sun was beaten back by the resolve to contribute. To change a few things. The way Gandhi had begun his work ! After about two hours, we had collected an entire truck load. Passersby in cars stopped. Got out, and said, how can we help? Come join us was the chorus !!

It was also good fun !

Then came the bit of educating all about the use of proper disposal methods. By now, the neighbourhood was aware that we had cleaned up that garbage and as we approached, many sheepishly admitted that they had contributed to it, while others didn’t. Some others did do other things.

One such was to point out other places where there are garbage mounds, expecting us to go clean those up too !

When we called it a day, late in the afternoon, every sinew hurt. We were hungry. Thirsty. And quite obviously – dirty. 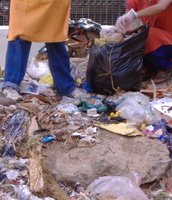 Our hearts were warm. Perhaps with the feeling, that we had remembered Bapu in a very unique way on his birthday. Perhaps it was because we had reached out to each other and established new bonds., Perhaps, because the place is clean !

Or perhaps, simply because we see it as just a beginning. The spirit of this Gandhi Jayanthi will take us forward. A long way !

The team players who have signed the sign up sheet include 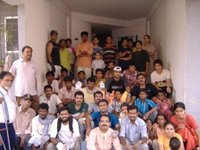 More than 50 people had chipped in. We are all smiles !