There are about 80,000 auto rickshaws on roads, according a friend of miner. Over here, the ubiquitous black hood, yellow body, faulty meter, loud auto riskshaw drivers are things that we are used to. (is much better, compared to places like Chennai where the rates quoted will depend on which nostril sucked in more air).

It was such a pleasant surprise to know recently that the rick, as we call it here has made an entry to the ! Our own Bajaj auto is over there. But with bright polka 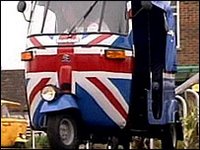 dots and blue patterns on the body. We are told that the public out there love it and costs some thing like 2 pounds to move around ! The cabbies must be fuming !

By the way, the UK ones have seat belts for the driver, passenger and run on CNG to meet emission norms. The service which is currently offered in Brighton, is expected to hit London by 2007 !!! London, here we come !! 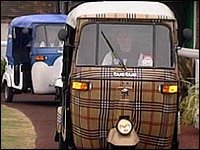 Well, well, the brits are taking to it for a ‘fancy ride’ said a friend of mine ! It would be nice to sit inside a bright red polka dotted ‘rick’. Thought for a moment as to what would be consequence if I did that in . Probably be disowned. Probably be the cynosure of all eyes. Probably…

If you ask me, forget the colour and designs, just get me a clean rick which with a friendly driver, who wont smoke / argue / cheat / rape / run away / pollute…and am a happy man !