Backstreet Is Back Again 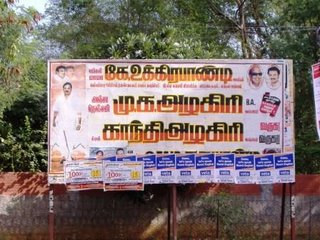 There are many unique elements to . One of it is the changing profiles of its landscape depending on the political party in power. The party and consequently the names of those out in the cold suddenly reappear on the walls and billboards. Changing fortunes determined by a seemingly intelligent electorate.

The attached snap is one that invites thes so & sos of the political scenario of to a ‘Kaathukuthu function’. Roughly translated, that’s ear-piercing & head tonsuring private ceremony. The So & so and his wife are to grace the function. Lo and behold the city is plastered with 20 X 15 ft posters.

The advertising fraternity & other brands (on whose paid for billboards such posters get plastered) have a tough time in the reaching out to a fickle consumer mind amidst great competition. That’s the world over. Over here, they have to combat shysters like these too.

Politics they say is a game of perception. Where perception is more real and than perception. What I am perceive of all this: Sycophancy. Cheap thrills and treating the law as one another family fiefdom.

This culture is not going to change in a hurry. I can do some crystal gazing confidently. 3-4 years later, the elections will bring other names and photographs to the same billboards. For more ear piercing & head tonsuring (ceremonies!).

Some years later, later the backstreet boys will return. And more than make up for the lost time! Huh!