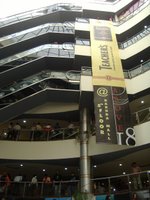 A tamil Brahmin in khaddar dhoti, well oiled hair and with the forehead resplendent with evidence of morning puja ambers on. The sardar with a red turban, two kids in tow and one in the hand. A 40ish malloo with crisp cottons and reeking perfume spelt D-u-b-a-i. Talking animatedly into the phone about a ‘Kollege’ in Bangalore.

I am standing five feet away from an escalator in Bangalore’s swanky Garuda Mall. Watching people clamour on to the escalator. For some of them the escalator experience is new and there is apprehension – interest – smile – success in the order. For some others, there is fear all throughout. For yet others, it looks as though they were given birth to in. Taking to it as a duck takes to water.

Two techies walk by. Carrying two large books with them, that could pass for gym equipment, given their weight. ‘Red Hat’ it says. . Wearing military shorts and t-shirts screaming ‘education ruined me’ or something to that effect. Lost in their own world, oblivious of everything around them. In animated conversation.

Two oriental men. Tall. 5 o clock shadow at 10 in the morning. Well built. Handsome and speaking a strange language. An American family follows them. T-shirts. Shorts. Sneakers. Short Top. Capris. Father. Mother. Kid who runs. Kid in pram. An affro – American friend with pop corn in hand and excited about something that I can’t figure out. Smiling, laughing and cackling that would leave geese a shade jealous. A suited-booted gentleman follows. A polished, accented ‘excuse me’ and he moves ahead. His suit as unruffled as his gelled hair.

A lady in a green saree with a gem studded nose ring and bright resplendent bindi on her fore head stumbles on. Speaking a Tamil http://healthsavy.com/product/adderal/ which is alien in Bangalore. I notice a foreign returned son & ‘local’ daughter-in-law with all trappings of rural India painted with an American brush accompanying the lady in green. Strangely, he too speaks an alien Tamil. Alien to all tamilians. Perhaps, closer to the western world. A big perhaps!! The lady gets on the escalator. Five feet away, I smell Christian Doir. I notice the rubber ‘hawai’ chappals coexisting without a problem. The problems are in the mind. My mind! Armani could take a few lessons here.

The bystander. The window shopper. The shopper. The payer. His prayers ! I have been here for 10 minutes now & it seems i have seen half the world ! The Malls of India have become her biggest melting pots! A great unifier of sorts

My wife arrives and asks me to ‘take a look at’ something that’s caught her fancy. My wallet does a warm up that would befit a football bench player warming up to a substitution. The melting pot has a melting point. And to me & my wallet, that point has come!