October 30, 2006Word Cachenew, old
The retail space in India is getting quite active. With the big guns including Wal Mart, Carre Four, Triumph and hordes of others vying with each other to set up shop and ‘reach out to the masses’. Yesterday, Reliance launched its retail foray, with its Reliance Fresh stores in Hyderabad, with much hype and hoopla. But as all this is happening, the local corner store continues to thrive.

To me, the big stores are clean, air-conditioned, orderly and many a time, downright scary. The local corner store, is in a way has an old world charm and smell to itself. It does not have the modern day supply chain management system. But ‘annachi’ has a way of keeping stock and reordering.

It does not have the sophisticated computers and calcualators to give you change for the odd 100 rupee note ! But then,the change is not a ruppee less. All calculated in the minds at a speed faster than what you could key into a computer.

You obviously will not get a bill. The stuff in glass bottles is limited. There is no parking. Floor space is on the platform. But, what the heck, who cares. Listen to this.. 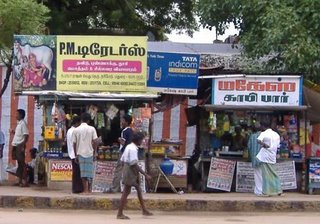 After 15 long years, when i went to this store in Madurai. Out of sheer nostalgia (& not to buy anything specifically). The owner smiled at me ( after 15 long years he knew me by face! It gave me a smug satisfaction that i was not old beyond recognition) ! He smiled.

Enquired as to where i was & what i did, and how my brother did. He then asked about my dad. And introduced me to his son. And then, walked next door to buy me a tea !