I failed the Don.

October 15, 2006Word CacheDon, Pet
It was seven plus years ago, that I first brought him home. He would fit into my palms. He would cuddle up. Lick. Whine. Play. Sulk. Eat. Sleep. Bark. Everybody in the family was against the idea, although they loved him. Somehow, in that trying time, I thought he would bring some cheer to the family. 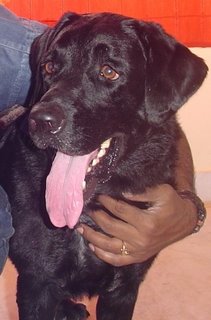 Today, two able bodied men, couldn’t hold him to a place. He did lick. He did sulk. I hope he eats. I hope he sleeps well. I hope he would continue to bark, with the same ferocity. For today, we gave him away. Today, I failed the Don.

We named him Don. I thought, he would stand for Don Corleone of the God Father fame! He turned out to be much otherwise. Although, the ferocity of the bark, and the ominous presence would scare the hell out of people, he was given to more gentle ways of the heart.

Ever loving. Upto pranks. Amma was his best friend. He would not budge without her word. And when she got dressed to go out, he would holler and bring the roof down. Only to wag his tail, as though it was made of some strange elastic band. It was indeed an elastic measure of his happiness.

I have many images of him. The most prominent, was when my wife (then, my wife-to-be) came home for a semi-formal meeting. He tore himself from wherever he was, and went to her straight. As everybody jumped in fright, he just knelt and just lied down at her feet. To me, it was a symbol of his saying “I am ok with her chief!”

The other was the image of him sprinting all through the home, upon seeing me after a long long spell away. He literally, sprinted back and forth for 15 minutes. At that moment, I only wished he could speak.

There are other images. He was a naughty fellow. He has chewed up stuff from the TV remote, to the best of footwear. And of course, the bone chews that we would get for him.

He has gotten older now. His pranks were getting too much for people at home to handle. For he stayed on in Madurai, along with Mom and Dad, as we moved on in life. For two old people to take care of him, besides taking care of themselves, was proving to be a problem. Plus, the travails of old age were showing up on him as well. And the Bangalore high rises are not kind to pet rearing at all.

Yesterday, he began his journey from , in a train. Today, at the railway station he seemed eager to get out. He was more used to freedom and large spaces at our home. Quite obviously, he did not find comfort in a small cage.

We handed him over to Karunas (formerly SPCA). They had basic facilities and they could take care of pets which the owners were no longer able to rear. I think, he had a strong understanding of what was going on. As we drove, he was all quiet. And would look at us with such dark gleaming eyes. And as I told him in my mind, “We love you, and I hope you will be able to take care of yourself”, and looked at him, he looked at me at that precise moment. And our eyes locked. For a change, I couldn’t continue looking at him for a long time.

At Karunas, Kamal was completing other formalities, I came outside only to sob and weep, leaning against the car. Much to the bewilderment of autorickshaw drivers who had ferried passengers to drop off their pets. I was called Deep Throat, and Hard Nut in many circles and here i was sobbing and weeping like a kid.

A sense of guilt enveloped me. I had brought him home. We treated him like royalty when he was with us. But, maybe he would have found a better home, where his future would have been much better. Maybe we should have brought him up differently. Maybe……Maybe I didn’t know. Today, I just failed him.

We handed him over. Took some snaps. And after Kamal walked ahead of me, I turned around, for one last long glance at him. My sun glasses were on, to hide the eyes that were erupting tears. He kept barking aloud. I could see his dark black mane, and his shiny white teeth. And the ferocious bark. I walked on. I hoped he could see my pain.

Its going to be very difficult for all of us to live without him. Amma will be most hit. She is perhaps going to miss him more than he would miss her. But, it was she who initiated this step, in the interest of his getting a better living. And it is she who will be most affected.

As I key this is in, there is a dawning realization, that life perhaps is moving into a different realm. And learning to let go, is an important facet of it. Of possessions. Of people, of love. And somehow, the ISABS experience came back to me : the importance of letting go of what people said and did, & move on.

I am not sure if I will ever be able to rear a pet again. While buying Don as a pup, somebody told me, “buying a pet is easy. But remember you are making a 10-12 year commitment”. It didn’t strike me as big deal back then, for his pranks as pup seemed all that mattered. As Upmanyu Chatterjee wrote in English August, “The ecstasy of the arrival, never compensates for the emptiness of the departure”

We drove back in silence interrupted by the occasional inconsequential conversation. Our minds were with him. He was no ordinary Labrador retriever. He was The Don. He would always be one for us.