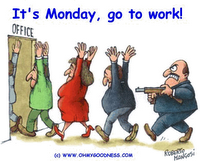 The weekend just sprinted by.I would want to put the weekends in a 100 meters dash with the likes of Joseph Gatlin an the others. The sprinting by weekends would win hands down. They just disappear into thin air.

Tomorrow is Monday. The week ahead looks hazy and loaded with work. But I still cant seem to understand one element. What is about work that keeps me down ? If I am calling work as ‘work’, does that mean I am not enjoying it as much?

Work has to be fun. Something that I look forward to. It cant be, rather, it shouldn’t be a just so that there is a money in the bank account at the end of the month.

I was telling a friend, that “I truly think I love my work”. He stopped me on my tracks, before I could qualify it, and said, “You THINK you love your work. Do you really ?” Armed with such deadly concoctions of thought, the ceiling at home got the longest and hardest of looks, so much so that I know every undulation!

In another unrelated conversation, yet another friend told me rather cryptically, “If you are asking the question too often, you know that it is true” Well, I don’t know where these folks get all their knowledge and insights from. But it made sense.

Someone else asked me, “If I assure you of the money that you are getting in the bank account every month, and told you that you could do anything that you wanted, what would you do?”

It didn’t require too much thought. In some random order I said, “Sleep. Hit the tennis courts. Read. Watch people. Blog. Listen to music. Write. Teach. Talk…” He shrugged his shoulder and said, “in one of those lies your future”. Wonder scientist !

I tried rationalising with him. I cant sleep forever, unless I wanted to make ‘sleeping with ‘ a profession. I doubt if I have the skill set or the interest for that . Tennis…Roger Federer would beat me even if he played the game with his left thumb and index finger. ‘Read’ I could. But to what end. Blog I could. But to what end…

He interrupted. “Listen, pal, lets get on with it. One of these days you will get an answer”. I looked at him. An answer. On my calling. On a weekday! Impossible !

This has been on my mind for sometime now. And obviously so, every Sunday night !